Zacchaeus was a tiny man

Zacchaeus was a tiny man,
Small both in heart and stature;
He was despised, for to his own
He was a low tax-catcher.

When Jesus came into his town,
Zacchaeus grew a-flustered;
He yearned to see this holy one,
And so his strength he mustered;

He clambered up a tree that stood
And to his sight gave favor.
And so he saw our Lord so good,
And felt his heart grow graver.

But Jesus looked into the tree,
His eyes not slow nor dodging,
And said, “Zacchaeus, come down here,
For I require your lodging.”

The people grumbled and complained,
“He’s eating with a sinner!”
But he did vow to right his ways,
And leave his purse all thinner.

Our Savior came to seek the lost,
And claim them with elation.
Zacchaeus found his home that day;
Its name is called salvation. 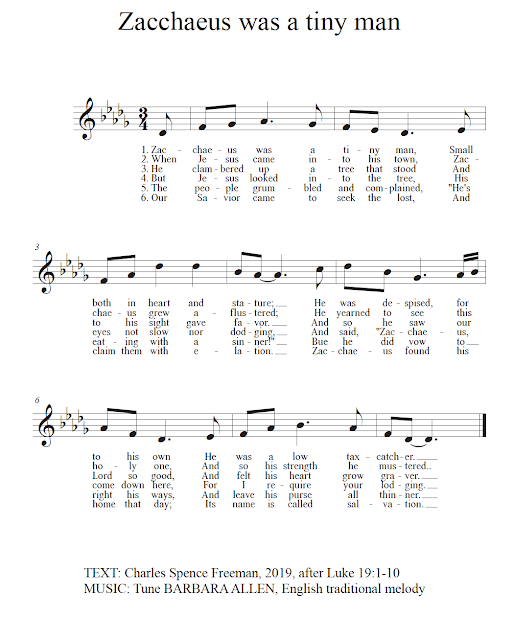 Another exercise of a sort, taking a known folk tune instead of a hymn tune with which I'm familiar. BARBARA ALLEN actually has been appropriated for a few hymns, though none I know terribly well (I think there's a John Bell text attached to it somewhere?), but for ex-musicologist me it's mostly known for the tragic love story most traditionally attached to it. With the tune coming first in this case (not my usual practice), I found myself, consciously or not, drawn to the idea of making or adapting a text that told a story, as ballad tunes like this one so often do. Conveniently, the story of Zacchaeus the tax collector happens to be the lectionary gospel reading for a week from Sunday. What fun when things work out that way...so if you were inclined to call this "The Ballad of Zacchaeus" I could hardly object.
Posted by Charles F. at 2:19 PM No comments:

Oh, when the storms are all too real

Oh, when the storms are all too real,
With winds or waters rising,
Our lives are lost or broken down,
By nature turned despising;
Our souls cry out in hard despair
With confidence sore shaken.
But where is hope when all is lost,
Or can hope yet awaken?
We do not serve a God aloof,
All cold and hard, unfeeling,
Nor are we cut off and adrift
Although our hearts are reeling.
The Holy Spirit swift and sure
Goes forth when creatures suffer,
And forges from God’s steadfast love
A constant shield and buffer.
That Spirit also calls us out
When nature’s might brings trouble
For neighbors near or neighbors far,
To hope amidst the rubble;
To build and fix and raise anew,
God’s care and mercy showing,
So from despair and hopeless
Come life and hope new-growing. 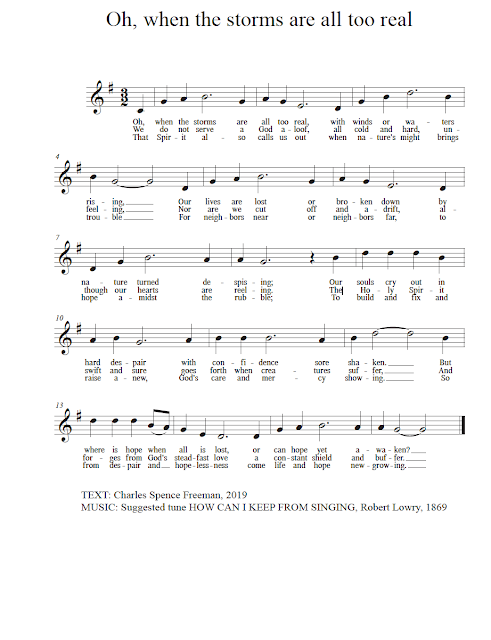 My frequent role as Weather Channel geek and general weather-worrier cropped up again this week after strong tornadoes hit the Dallas area. Of course, in Florida there's always a hurricane to remember, whether it hit the state proper (Irma, Michael) or neighboring island areas (Maria, Dorian). I never want to dismiss the destructive powers of nature, even while seeking a theology of creation more characterized by living within it rather than dominating it, so facing such disasters is mandatory. In the meantime, such disasters may need to be addressed in worship.
Posted by Charles F. at 5:44 PM No comments:

Charles F.
I'm a reasonably competent musicologist/university professor who chucked all that to go to seminary (from which I have now graduated) and have now ended up as pastor of Grace PC in Gainesville, FL. So, really, what kind of fool am I?